China's Brain-Computer Interface Landscape in 2021: Has the Dragon Woken up to Neurotech?

Chinese brain-computer interface research is about a decade behind the US or Europe but is likely to catch up quickly as the government pours funding into the China Brain Project. Local manufacturers of implants for Deep Brain Stimulation (DBS) and Spinal Cord Stimulation (SCS) are giving established global players a run for their money. Neurotechnology startup activity is limited.

Global awareness of China's progress in BCI (or any technology) is much lower than the average Chinese person's awareness of Western advances. Chinese media extensively covers news about global BCI events or milestones. Research papers are accessible (and widely accessed) by Chinese researchers, who are part of the international research community. Although Chinese work is starting to be more accessible to a global audience, many Chinese-language publications or media reports are never translated. This post is probably similarly incomplete and perhaps biased, as it is compiled almost entirely from English-language media reports and papers.

Globally developed neural interface devices (say deep brain stimulation devices or cochlear implants) are also widely available in China. China is a critical, fast-growing growing market for these device makers. In addition to these, Chinese physicians have access to locally developed implants and are starting to use them to treat a broad set of illnesses. For example, 61.8% of China's clinical trials of DBS involve non-motor indications (such as neuropsychiatric conditions and opioid addiction), unlike in the West where the primary indications for DBS are Parkinson's disease and essential tremor.

The most convenient way to look at neurotechnology initiatives in China is to look separately at government intent, university research, startups, and established medical device manufacturers — although all these entities are linked.

The Chinese Government and the Brain Project

Brain-computer interfaces, Neurotechnology, and Neuroscience research are all focus areas of the 'China Brain Project', announced in 2016 as part of the 13^th^ five-year plan. The project's ambition is to lead the world in neuroscience, especially applied neuroscience for brain disease within the next few decades. It is motivated by the realization that by 2030 half of the world's people suffering from neurodegenerative disease will be living in China. 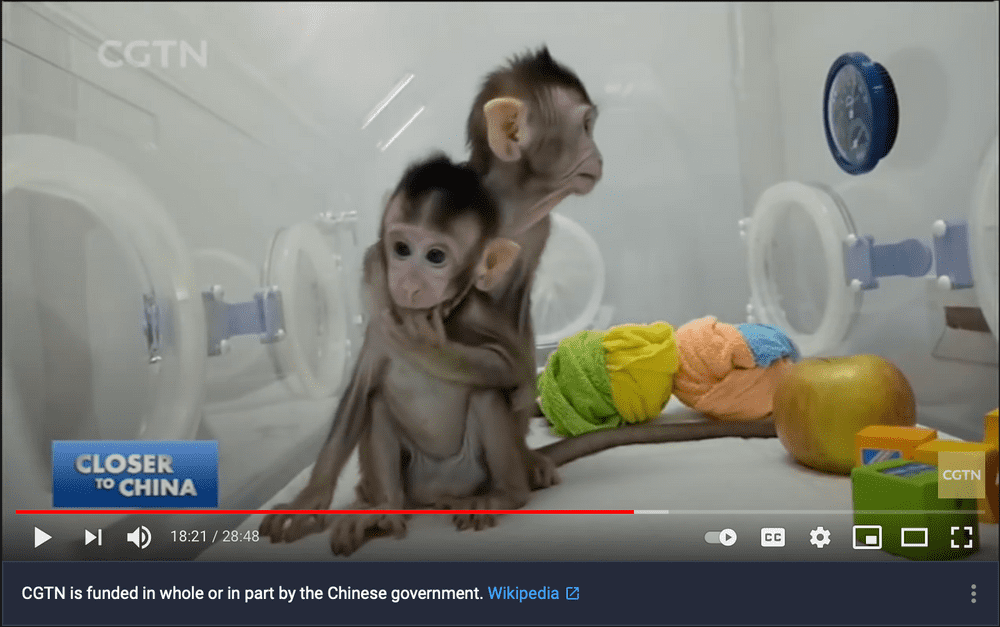 Screenshot from the CGTN video about the China Brain Project

This video is a thorough explainer of the Project's goals and the 'One Body Two Wings' vision for brain research. Produced by the state-owned China Global Television Network (CGTN), it allows a glimpse of the brain project as the government intends to portray it, giving a glimpse into the leaders' goals and their perceptions of China's strengths and weaknesses for neurotechnology research. The directors of the project see China as well-positioned to study neurological and neuropsychiatric disease given their large population and emphasize the need for better characterization of these illnesses in the Chinese population. In addition to neurological disease research, they also have an eye on medical devices and neuromodulation. They concede that the US will continue to lead the world in basic neuroscience research for many years to come.

A key feature of the Brain Project is the International Primate Research Center in Shanghai, a facility that the leaders of the project hope will spur international collaboration. They plan to use the facility to conduct functional research and to develop new primate models of neurological disease.

Universities and Research Institutes involved in Neurotechnology and BCI

Money invested by the government goes to dedicated brain research institutes or universities across the country. These centers recruit research groups and investigators, often with a focus on attracting talented Chinese(largely) individuals that have been trained overseas. Some of the top centers in China for BCI research are the Tsinghua University, Tianjin University, Zhejiang University, the newly established Institute of Neuroscience in Shanghai, and the Chinese Institute for brain research, Beijing.

Zhejiang University: Developed China's first brain-computer interface implanted in a human in 2020, announcing a successful implant in a paralyzed individual that allowed him to manipulate robotic arms with his thoughts to shake hands, carry drinks, eat fried dough sticks and play Mahjong. 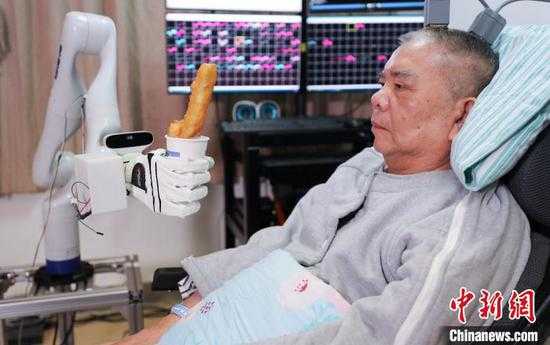 Chinese Institute for Brain Research, Beijing: Launched 2018, the Beijing Municipal government is funding the institute with with USD 29MM in the first year, with a future USD 65MM annual budget.

Institute for Neuroscience, Shanghai: Part of a Neuroscience research science park being built in Shanghai and funded by the Shanghai Municipal government, one of the highlights of the institute will be the International Primate Research Center, to house as many as 6000 non-human primates. Positioned as a world leader, the center has already attracted international scientists.

Tianjin university: Source of innovations such as a 'Brain Talker' computer chip designed for BCI applications, an exoskeleton rehabilitation hand robot, and a 'Mind-Typing cap' that allows the user to brain-type 69 Chinese characters per minute, exceeding the speed of using touch screen mobile phones to type.

Clearly, in a country as large as China, there are many more than these 5 top-tier universities working on neurotechnology, including in areas such as materials science, electronics, and neuromorphic computing.

Startup activity in brain-computer interfaces or neurotechnology appears limited, with sporadic funding announcements, and not many demos or products available in the English-language media. The startup Neuramatrix incubated by Tsinghua university — generated a bit of a ripple earlier this year when they made a funding announcement. Founded in 2019, the company employs about 50 people, mainly R&D and product engineers, and claims that their invasive BCI chip rivals Neuralink.

Screenshots from the website of a company named 'Naolu' showing their 'Brainup' product (left) whose marketing graphics and headband appear to be 'inspired' by Muse (right).

This list of Chinese BCI startups is largely comprised of developers of non-invasive headband-type devices for meditation, biofeedback, and other consumer applications.

While university research and startups are still nascent, Chinese manufacturers of DBS and other neuromodulation devices have advanced quite far in the last decade. DBS in China is used not only for Parkinson's disease but also for non-motor diseases. Ruijin Hospital in Shanghai, for example, runs a DBS research center for addiction, Tourette syndrome, depression, anorexia, and other neuropsychiatric conditions.

The Chinese manufacturers PINS Medical and Sceneray offer DBS systems on par with, if not more advanced than their Western equivalents. Both companies' devices are approved for use by the Chinese FDA, have the European CE mark and have been introduced to markets like Pakistan, Bangladesh, and Indonesia. Both companies offer advanced remote wireless control of the implants, with well-established methods for remote programming and calibration of the devices and monitoring battery levels through telemedicine by clinicians that may be far away — a feature that has been rendered invaluable during the COVID-19 pandemic. Additionally, both companies are expanding to invasive and non-invasive vagal nerve stimulators and spinal cord stimulation devices. 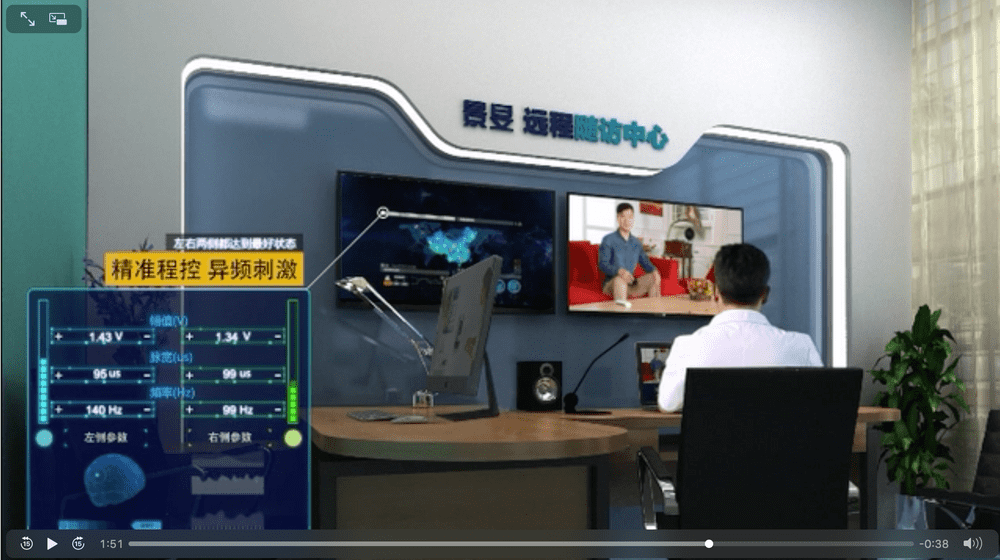 China is also the fastest-growing market for cochlear implants, with the Hangzhou-based company Nurotron gaining market share from Australia's Cochlear, Swiss-based Sonova, and Austria's MED-EL not only in China but also in other emerging markets.

It is yet to be seen how much original neurotechnology research will come out of China, but it is already clear that the country will be key to the commoditization of these interfaces. In turn, this will facilitate access to this technology globally and make them more affordable for