Neural interfaces may be mainstream before we know it, in very familiar form. Facebook's Reality Labs division is working on a consumer device that senses tiny nerve signals at the wrist to offer unheard-of degrees of hand control. Cala Health has taken wrist interface technology into medical device territory. Their prescription-only wristband for individuals with movement disorders influences the brain's tremor network by stimulating nerves at the wrist. This blog post explores how these devices sense and stimulate nerve fibers at the wrist to create new pathways to and from the brain.

Futuristic devices that read signals directly from neurons in the brain have captured media and investor interest, based on the premise that we could one day communicate with computers at much higher speeds. The promise (or the threat, depending on your point of view) is that this 'neural lace' will allow us to mesh more closely with machines, to have them read our thoughts (and maybe write them!?) so that we can transcend our human limitations.

The technology that ushers in this sci-fi future will probably be much more prosaic — and safer — than Neuralink's invasive electrodes or even Kernel's TD-fNIRS helmets. Facebook's 2019 acquisition of CTRL-Labs and their continued investment in the wrist-worn nerve sensor technology mean that the first directly sensed consumer neurons will be those that innervate the forearm and hand.

Sensing from wrist nerve fibers just underneath the skin

The name EMG or electromyography sounds like it means electrical signals from the muscles — but what the sensors really pick up are action potentials from individual motor neurons that innervate these muscles. These signals are amplified and converted to detectable waveforms by the muscle fibers before the muscle contraction occurs. The sensors on the wristband pick up the intent to move, rather than the motion itself. This allows the user to have new dimensions of control and creates a faster, higher-bandwidth connection with the environment than our natural hands.

The wrist is the perfect candidate for a consumer neural interface because it allows for non-invasive access to nerve fibers running just beneath the skin. Wrist EMG is physically comfortable, and the form factor is familiar. More importantly, it's reassuring that these devices can't really tap into your thoughts but can only intercept the volitional control of your muscles. 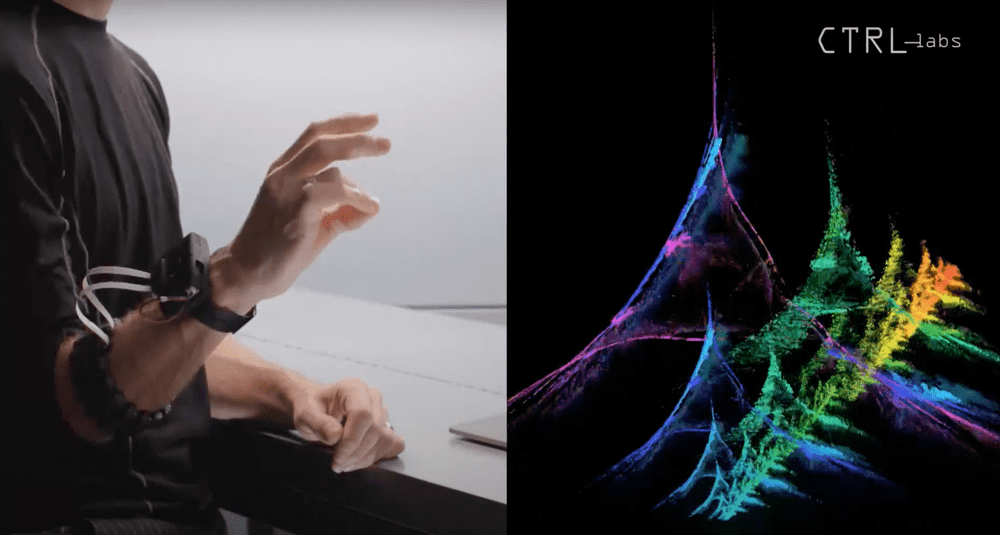 Demo of CTRL-Labs' technology before they were acquired by Facebook.

Founded in 2015 by internet pioneer-turned neuroscientist Thomas Reardon with two more neuroscientists Patrick Kaifosh and Tim Machado, CTRL-Labs was distinct from brain-computer interface startups because the team set out to make a consumer device, a daily-use interface to the computing world. They started to "build devices that allowed them to listen directly to the neurons that are otherwise controlling muscles".

By 2019, when Facebook acquired the startup, CTRL-Labs had developed a wristband prototype that could guide a six-legged robot spider, touch-type, control a wide range of on-screen movements, and more. Since the acquisition, the team has continued to build on its foundational research. Their work on decomposing signals into their constituent motor units, motor unit recruitment, and adaptive learning is taking the EMG field in a very impactful direction. As part of Facebook's 'Reality Labs' division alongside AR/VR, they appear to be leaning hard into interfaces to the virtual world, including a wrist haptic feedback prototype, that allows the user to feel growing resistance while drawing a virtual bowstring.

It appears that Facebook is committed to the wristband tech for the long term, with VP Andrew Bosworth speaking of this technology as an investment with a 5-10-year horizon. Earlier this year, Facebook divested its other BCI projects, such as the implanted speech neuroprosthesis collaboration with UCSF scientists.

The other path-breaking wristband interface — Cala Health's Cala Trio device — has little in common with CTRL-Labs', apart from their investors. Both companies received investment from Lux Capital and GV (Google Ventures). The Cala Trio does not use EMG sensors, is a medical device rather than a consumer gadget, and is already on the market as a prescription device.

Cala Health is the poster child for bioelectronic medicine, a class of therapies that aims to treat chronic diseases by electrically stimulating nerves. Also called 'neuromodulation', this rapidly growing branch of medicine is developing devices that stimulate various nerves to treat cardiovascular, metabolic, or neurological conditions without the side effects that pharmaceuticals often cause.

The primary indication for the device is essential tremor — a kind of arm tremor that affects 7 million patients in the US. In the company's words "Cala Trio gently stimulates the nerves in the wrist to disrupt the tremulous activity in the brain, without the need for invasive brain surgery or medication". Founder and CSO Kate Rosenbluth and CEO Renee Ryan have led the company through a large clinical trial, tracking therapeutic efficacy for months as patients wore the devices at home.

The device is one of the first successful peripheral neuromodulation therapies to come to market. Its presumed mechanism of action is that it stimulates nerves at the wrist to target the ventral intermediate nucleus in the brain. This turns the median and radial nerves into a non-invasive interface to the brain's tremor network. Unlike typical prescription medical devices, the Cala Trio is patient-centered, meaning that it is shipped directly to the patient's home once prescribed, and the patient is in full control of the therapy. The wristband also contains onboard accelerometers that allow it to track the motion of the arm and hand in 3D. This data is returned to Cala Health while the device is charging, and the company can use it to monitor the efficacy of the therapy and improve it further.

The company and recently received FDA's breakthrough designation for Parkinson's disease tremor, signaling an easier path to reimbursement in the US market. Cala Health's last fundraise was a $50MM Series C round in 2019. The team is pushing forward to deliver more neuromodulation therapies for neurological, psychiatric, and cardiovascular conditions — perhaps by stimulating nerves through a wearable device at the ear.

The two devices come from different worlds and have vastly different target users, but both point to the wrist as being the gateway to the brain. Whether it's sensing the intention to move as in the case of Facebook's still-unnamed wristband or stimulating peripheral nerves to affect central nervous system networks in the case of Cala Health, non-invasive access to nerves at the wrist opens up a world of possibilities.

Medical device development is chronically underfunded. As a result, the underlying technology is frequently outdated when it comes to market, and the devices themselves are not always user-friendly. Facebook's investment in accessible, consumer-focused neural interfaces (and the R&D behind them) may well be the catalyst this space needs.